Power BI is a great tool for data visualization. There are many templates and types of visualizations, that are ready to use. When creating reporting for client the P&L and BS statements are bread and the butter. Sadly Power BI does not have in-build template  to create such statements. Nevertheless, this manual shows relatively easy method to create those statements using Matrix and advanced measures in DAX.

Before we start I would like to present outcome of this solution. 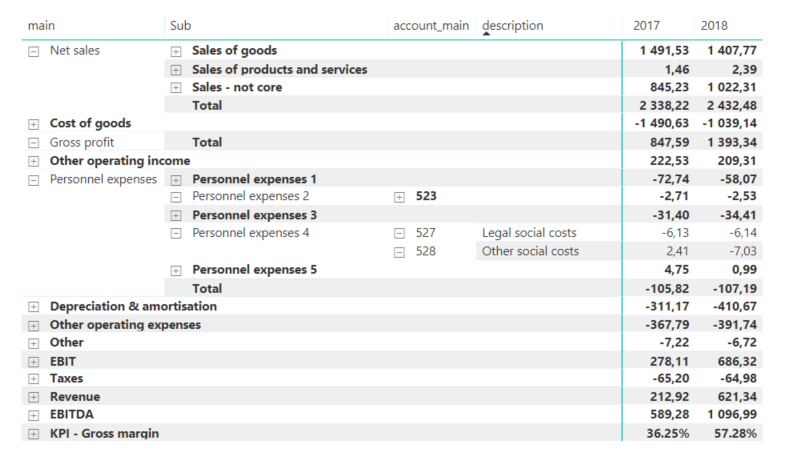 Building stones of the solution:

To create P&L in Power BI you need to create template consisting of at least two tables (main and sub). This represents two main levels of the template. In the main table the key column is is_sum. Based on this column three different measures are used to create P&L template (one is basic sum, two is cumulative sum based on order_cumul and three is KPI).

Secondly, you need data (monthly trial balances in example) and chart of accounts which connects accounts and mapping and other info. 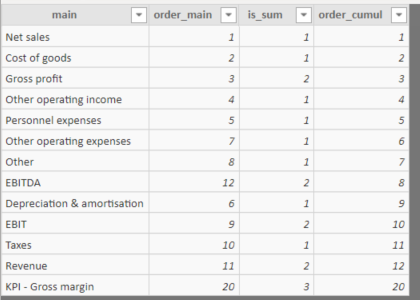 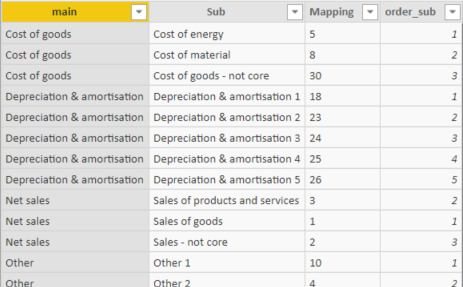 The structure bellow represents basic data structure. Table data represents monthly trial balances. This is connected to P&L template via COA. On the right we have standard date table.

Basically we prepare three different measures and the function SWITCH()  connects appropriate measure to appropriate row based on [main].[is_sum] column. When we calculate basic sum (1 for example Net sales) we do not omit relationships between tables. In case of (2 for example Gross Profit) and (3 KPI) we want to select all data and than add our own rules that specify calculations ( FILTER (ALL ( main ); main[order_cumul] < VALUES ( main[order_cumul] ) ) ).

Main measure checks based on the subcategory if it should return blank (for calculated rows like EBITDA etc..) or it should give a propriate measure. If we omit this condition after clicking on + sign on EBITDA you would see all  rows that were used to calculate EBITDA which is mathematically correct but does not have much sense in case of  this statement. Other than that it utilizes function SWITCH to connect correct measure to correct row.